THE FASCINATING CONTRAST OF A BICULTURAL FAMILY. 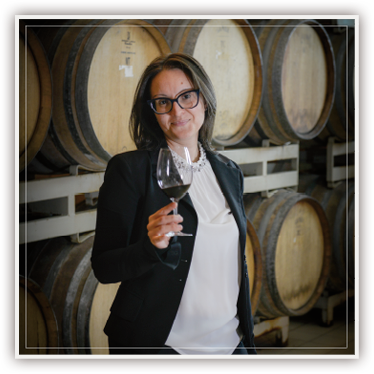 Native, Uncontaminated, Versatile with an incredible sense of hospitality. From a family that has always sought excellence in their food and in their relationship to nature in Abruzzo, at the heart of the Italian peninsula. Trouble-shooter by nature, she strives for excellence in her life, eco-system, estate and product. A missed mathematician that is stimulated in understanding the interaction of man and machine and the use of automatization in all processes. Man thinks and machine implements. Constantly seeking to produce that perfect bottle of wine to drink with her children when they will turn of age and with her parents that are straight-edged (non-drinkers). People would be surprised by her sensitivity. 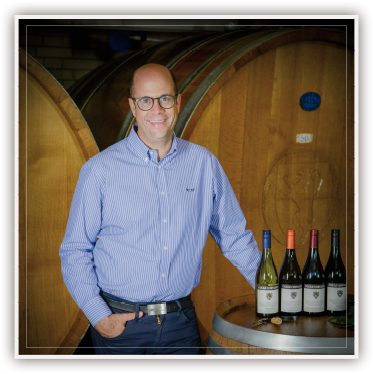 Compulsive multi-faceted globe-trotter that embraces Heraclitus’ assertion “Panta Rhei” or “Life is Flux” as change is strongly linked to development, improvement, progress and growth. From a family that has always cherished truth, honor and vision. He is a missed reporter that has chosen to “find the story” in the world’s greatest Food Mecca: Italy, the cradle of culinary excellence. It is The Boot that churns an incredible array of epicurean gifts to the world including our wines. Constantly seeking to understand the interaction between man and mother nature. Would drink that perfect bottle of wine while listening to Bossa Nova or Soul. People would not be surprised by his passion for Opera! 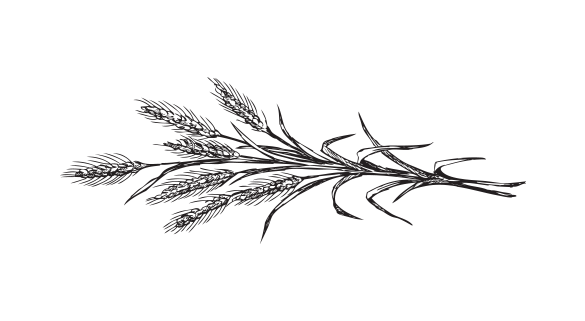 Drawn by the extraordinary potential of this region and bonded by their common aspirations, today they are one family that operates and manages the estate.

The Abruzzo region needs to be discovered: Intact and unknown, it offers unique characteristics blending Nature, Art and History. Firstly Nature: The Sea, the beaches, the mountains and national parks position the region on the pinnacle for green vacationing, retirement destinations.

Located only 2 hours from Rome, few are aware of the fact that it holds the lowest percentage of tumor related deaths, that it is the greenest region of Europe with over a third of the region covered in 4 National Parks and Reserves. In addition to this Natural frame, thousands of castles and abbeys together with the enogastronomical culture of this region including the leading pasta producers of Italy and the world. Abruzzo is one of the few parts of Europe still spared the influx of mass tourism and industry. 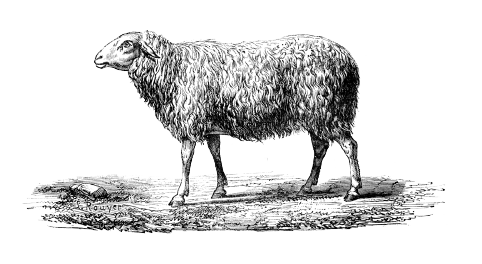 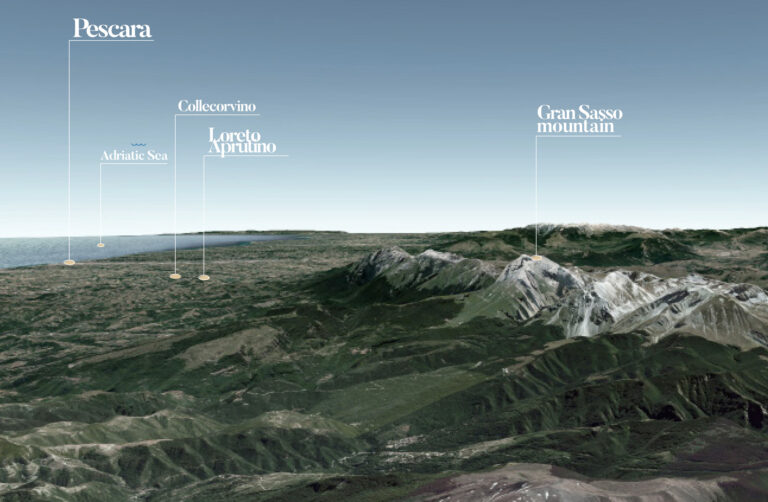 The history of Abruzzo is one of unrest and emigration. Abruzzo was originally conquered by the Romans, who divided the territory into two parts. With the fall of the Empire, Abruzzo fell under the control of the Byzantines, the Lombards and the Franks. The region later became part of the Kingdom of the Two Sicilies and was under the Norman domination when Emperor Frederick II united the area and founded the city of L’Aquila. 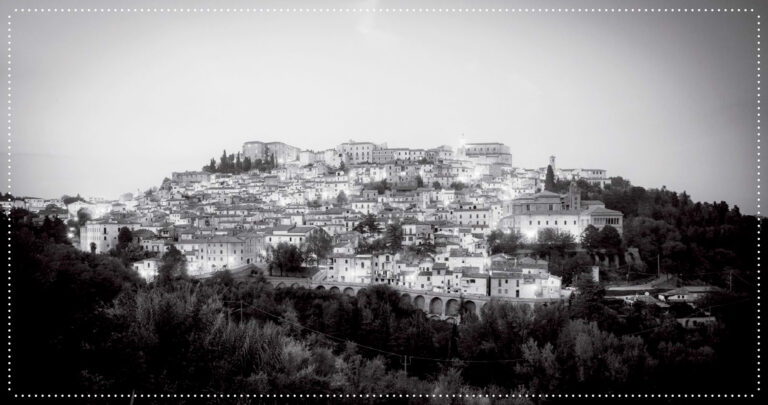 A small Italian village which clings to a hillside in Abruzzo. Set like a diamond between the coast of Pescara and the Gran Sasso, it is considered one of Italy’s most beautiful. The ancient Roman land of Laurentum stood atop a hill, surrounded by bayleaf trees and adjacent the Tavo river, among vast expanses of olive groves, giving explanation to the origin of its name. The village preserves its historical and architectural physiognomy and the characteristic medieval look of narrow houses and buildings around the Chiola Fortress, further documented in official documents in the year 884. Loreto Aprutino carries this double name since 1863 when, with the unification of Italy, the need to distinguish it from another town in a different region arose. Its origin is ancient, as reflected in the countless necropolis found in the area of Fiorano dating back to the IV century bc. 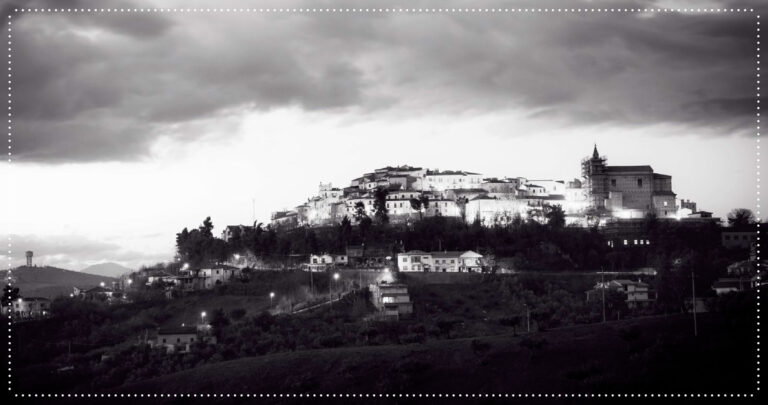 The Norman conquest of southern Italy spanned most of the 11th and 12th centuries, involving many battles and independent conquerors predominantly by Norman pilgrims returning from Jerusalem. Only later were these territories in southern Italy united as the Kingdom of Sicily, including the island of Sicily, the southern third of the Italian Peninsula, the archipelago of Malta, and parts of North Africa. Norman mercenaries fought in the service of Lombard and Byzantine factions, establishing fiefdoms and states of their own, uniting and elevating their status to de facto independence within fifty years of their arrival. Collecorvino merged in 1071 with the county of Loreto as a fiefdom, becoming a stronghold of the Count of Loreto and a key part of the Normans defense line together with its sister village, Loreto Aprutino. 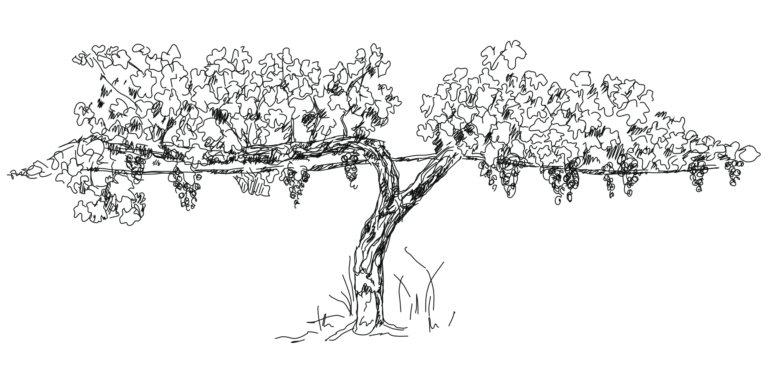 At Colle Corviano, estate-vineyard blocks are vinified separately and traced throughout the production process. Each vineyard block has been delineated and planted based on the accumulated knowledge of soil profile and chemistry, aspect (orientation to the sun), slope (vertical degree impacting potential for drainage), and overall climate. Terroir defines our plantings, without regard to what may be fashionable today. Each block has its unique geological history, which provides distinctive flavors. As the roots of the vines forge deep into the earth, their individuality becomes more pronounced. The grapes from these blocks were planted in 1973. The Colle Corvino Parcel totals 15 hectares and is located adjacent to Picciano, Colle Corviano and Loreto Aprutino with an elevation of 300 meters above sea level. The vineyard has 7 heactares of Montepulciano and 8 hectares of Trebbiano. 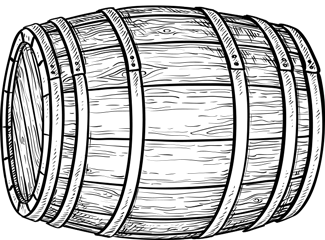 We carry out reductive vinifications for the production of white and rosé wines to promote aromatic freshness that is respectful of the varietal characteristics. During vinification we ensure the protection against oxidation, especially during must extraction, by using inert gases such as CO2.

We apply micro-oxygenation during the red winemaking process to promote more elegant and balanced wines. This addition of oxygen into red wine helps stabilize color and improve astringency and aromatic components of the final wine. 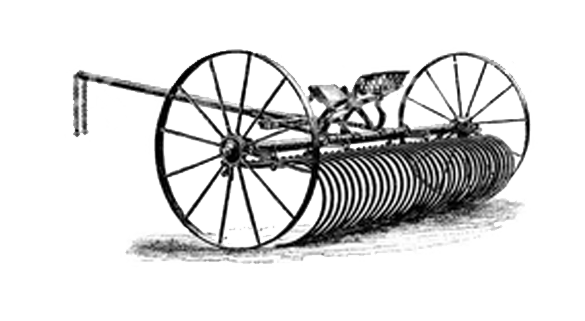 A wine’s characteristics is heavily influenced by the soil in which a grape variety may be planted. The diversity in soil composition, such as that with varying levels of limestone, skeleton, clay, silt or sand, will directly affect the organoleptic qualities of any wine, including ours, in terms of color, smell or taste. After all, soil, is an integral and essential part of the “terroir” concept. When associated to our environment and climate, it contributes strongly to producing unique wines, unrepeatable elsewhere.

During the Pliocene epoch our region consisted essentially of a sea bordering the young Apennine mountains. From the top of these mountains, the rivers, such as the Tavo carried debris that it deposited on our hills, including initially refined clays, and subsequently silt and sand. Subsequently, during the Pleistocene epoch, characterized by glaciation, our area was definitely formed modeled almost permanently under the influence of glaciers and with the further engraving of the valleys defined by powerful rivers. Geographically speaking, the villages of Loreto Aprution and Collecorvino are located to the left of the Valley of Tavo, with land extending from 150 to 350 meters above sea level.

Sustainability still has varied definitions in our world. At Colle Corviano we aim to give the term clear focus and a concrete meaning. It is more than simply an aspiration or mission. It is our lifestyle. Aside from the objective to save our resources, being sustainable on our estate implies practices that are used to ensure high quality in our wines, that keep vineyards healthy and productive over the long haul, minimizing negative environmental impacts, along with winery methods that conserve resources and reduce waste and pollution.
Our commitment to a sustainable ecosystem focuses on health, efficiency, waste and improving our habitat:

No irrigation is ever used, reducing the waste of water and improving energy efficiency.

We use exclusively 100% renewable energy sourced from local windfarms.

In our ecosystem, we seek first foremost the vine’s equilibrium in the management of our vineyards to minimize their susceptibility to insect and disease attack. Constant monitoring of the vines, the encouragement of biodiversity by removing broad-spectrum insecticide and herbicide use, and the creation of wildlife habitats such as raptors.

We use vegetation between the rows to protect the structure and nutrition of our soil. We seek to ensure varied greenery around your vineyard where insects can live, breed and feed. As the greenery decays and decomposes over their natural lifecycle, it provides crucial nutrients for soil life.

Landfills are overflowing all over the world. One of our prime objectives is to minimize landfill use. Therefore, we have been utilizing recycling bins since 2007 for all waste at the winery. In addition, the skins and pips after fermentation are partially used as compost to enrichen the soil. Fundamental is our use of lighter glass bottles to contribute to reduced levels of carbon footprint.

We look closely at creating or enhancing our community by fixing town roads, promoting our region and encouraging tourism. We link ourselves closely with the school network from kindergarten to graduate schools, encouraging the love and passion for agriculture, our heritage, a sensible consumption of wine, and interaction with University research.

Our community starts at home and in our winery. We incentivize a healthy lifestyle for our workers, including providing incentives for a smoke free environment, English lessons, benchmarking trips and child care. Safety is also of great importance to our estate. 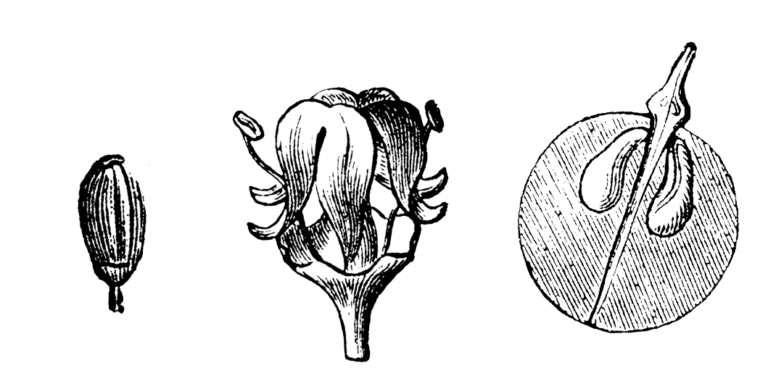 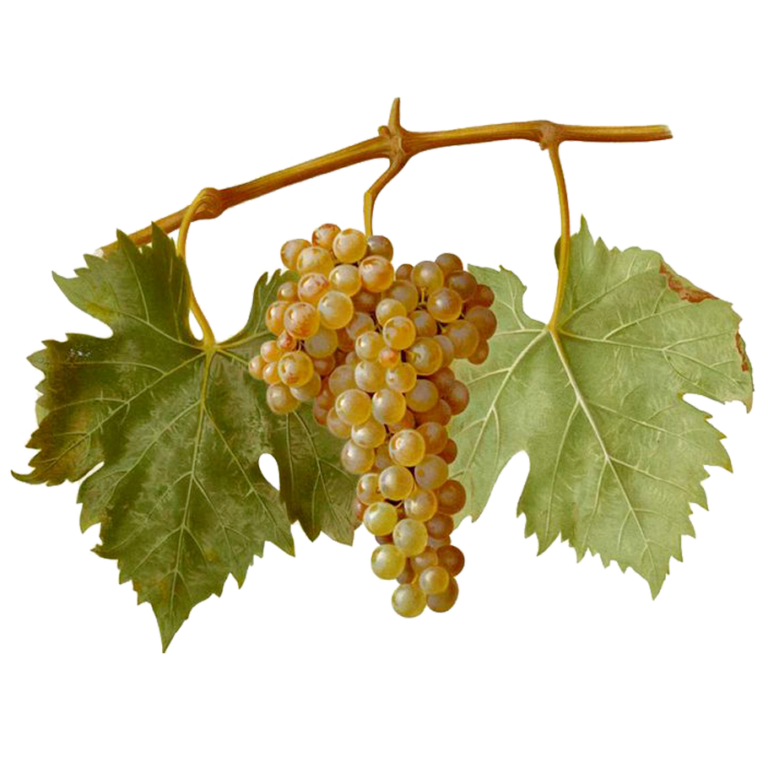 The presence of Trebbiano in Italy is traced back to over 2.000 years ago: Roman Historian Pliny described a “vinum trebulanum” in present-day Abruzzo. Its etymology indicates a popular white wine produced throughout the countryside. A favorite among Italian vignerons, it is one of the most widely cultivated varietals in the world, producing refreshing and delicate single-varietal wines, French Cognac and traditional balsamic vinegar.

Pecorino is a light-skinned wine grape used in Italy‘s eastern coastal regions, particularly in Abruzzo. Cultivated for hundreds of years, its low yields saw it replaced by more-productive grape varieties like Trebbiano until thought extinct. The grape is so called supposedly because it was a favorite treat for flocks of sheep driven to lower pastures. 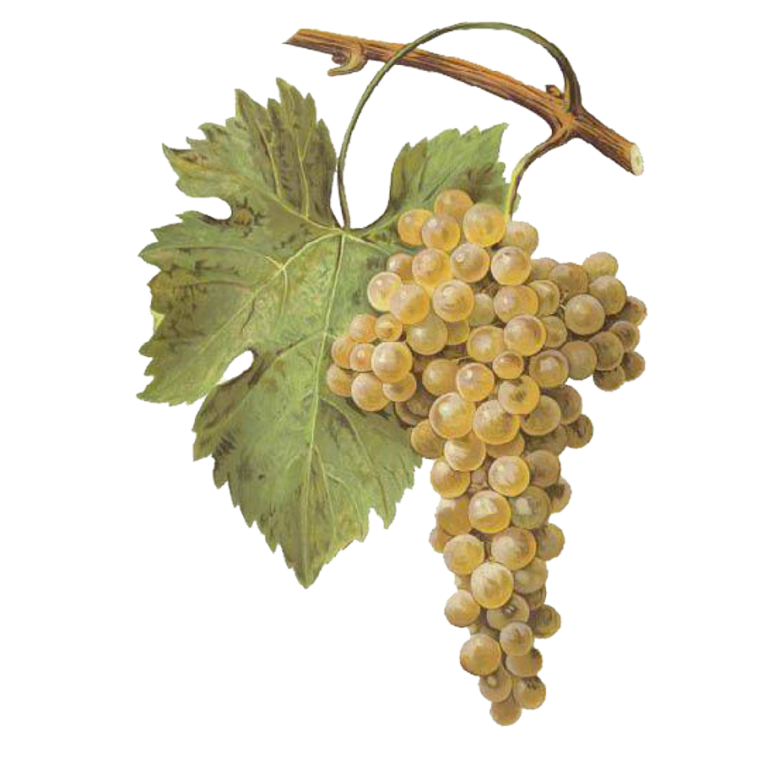 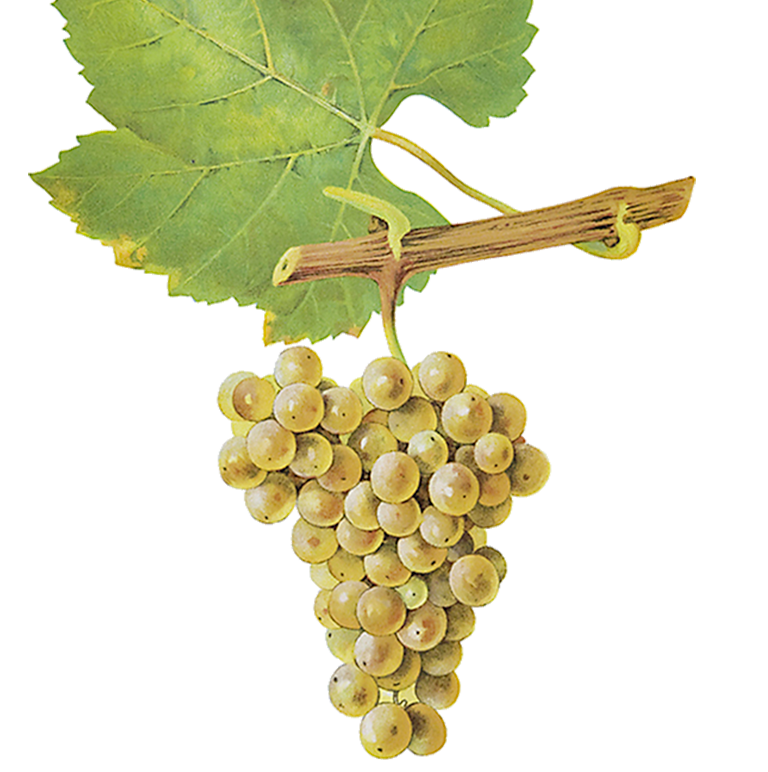 Undoubtedly the most famous vine variety of all, Chardonnay, is widely grown in the world. In Abruzzo, it has been cultivated on limestone soils for over 350 years. Since limestone is primarily the remains of sea-life, accumulated over millennia where ancient seas used to reside, you’re literally sampling our history with every sip!

Italy‘s most popular white wine is produced from the Pinot Grigio grape varietal. Loosely related to the Pinot Noir grape, the grape normally has a grayishblue skin, accounting for its name – gris meaning “grey” in French; pinot comes from the French word “pine cone,” which could have been given to it because the grapes grow in pine cone-shaped clusters. 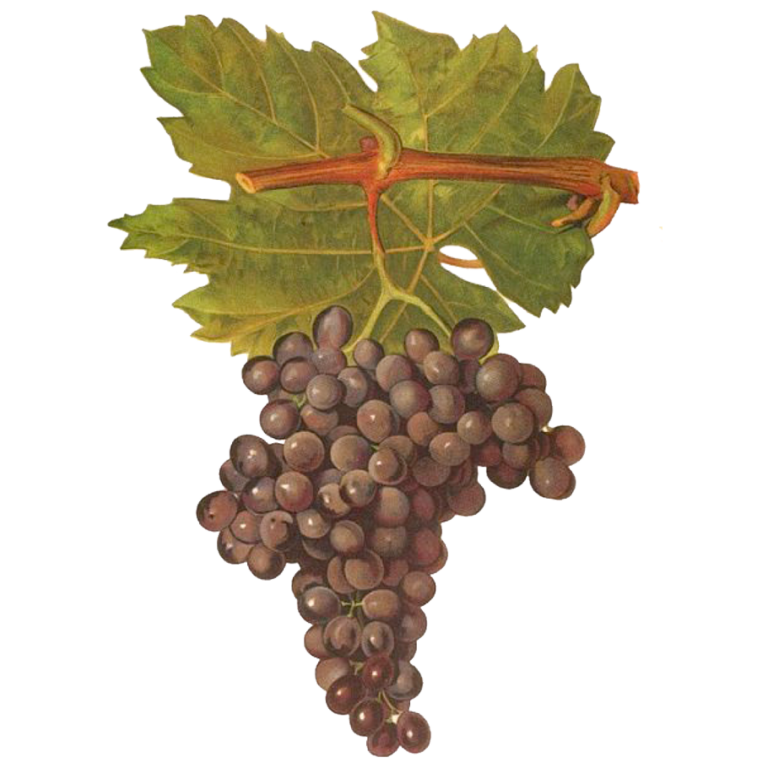 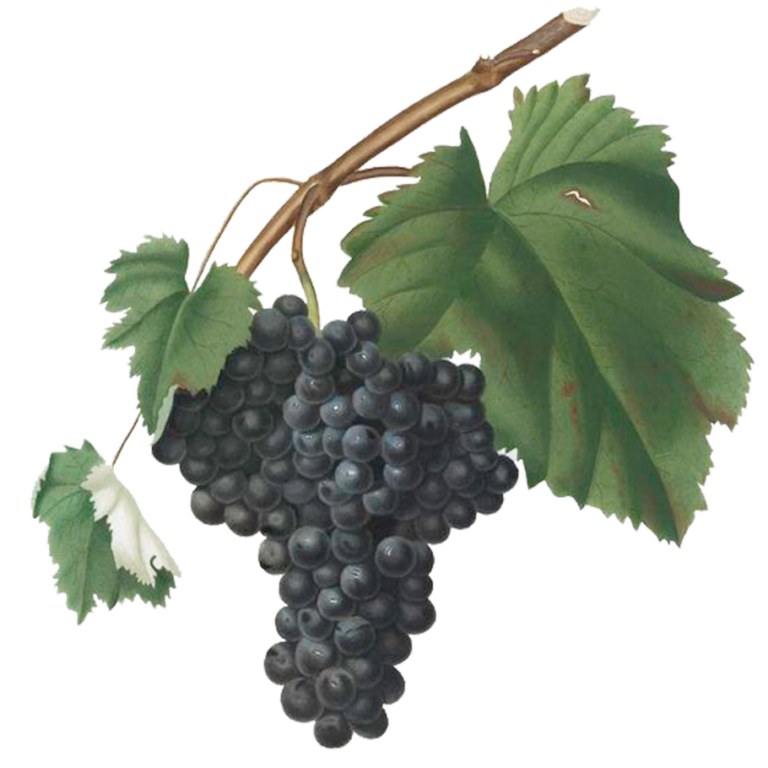 Sangiovese is to Italy what Cabernet is to France: Father of among the greatest of wines and practically omnipresent in Italy. In its different clonal varieties it continues to prove its unquestionable virtues in central Italy. For the best quality, yields need to be kept in check as the vine is notably vigorous and prone to overproduction.

Native to Abruzzo’s Majella mountain, it is planted throughout the east coast of Italy. The Montepulciano is a mountain wine. Everything about it demonstrates this origin: It is rebellious and majestic, full, sharp, inscrutable, reminiscent of underbrush with moist blackberry nuances, reaching unimaginable heights of fruity warmth, with sour-cherry flavors. Its wild nature, if properly tamed, render the Montepulciano grape capable of ageing superbly over 50 years. 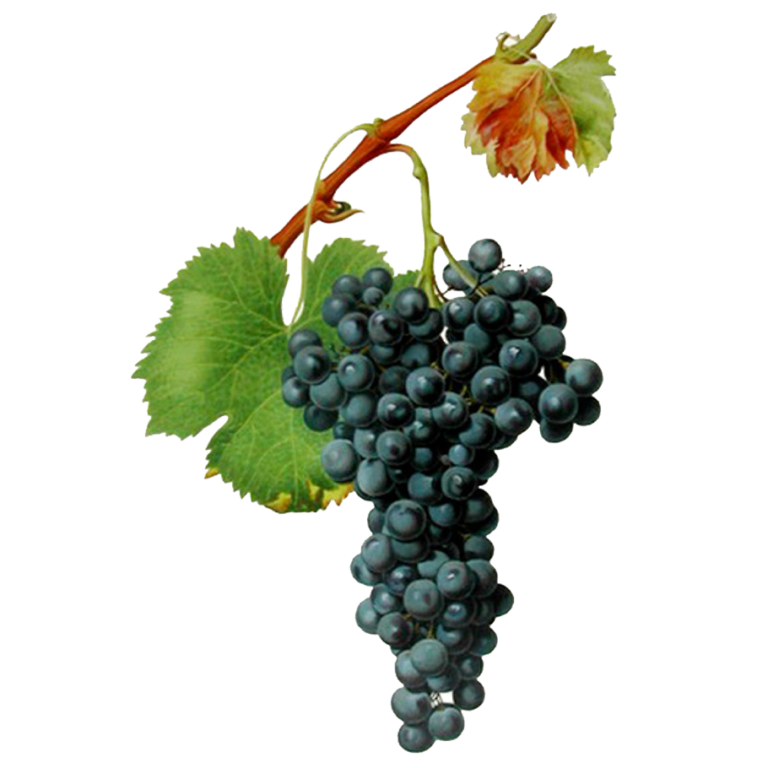 A CAMPAIGN FINANCED ACCORDING TO EC REGULATION N. 1308/13